POPULATION ESTIMATE OF REPUBLIC OF CROATIA, 2020

A decrease in population continued in 2020. As compared to the previous year estimate, the population decreased by 17 573 persons or 0.4%.

In 2020, the continuous ageing of the population kept on. The average age of the total population of the Republic of Croatia was 43.8 years (men 42.0, women 45.5), which places it among the oldest nations in Europe.

The ageing process was to a great degree caused by the multi-year drop in the share of youth (0 – 19 years of age) in the total population. At the country level, this share amounted to 19.1% in 2020, while at the county level, it was the lowest in the County of Primorje-Gorski kotar (16.4%) and the highest in the County of Međimurje (21.7%).

The share of the fertile contingent in the total female population continued to decrease. Therefore, in 2020, it amounted to 40.8%.

G-1 SHARE OF POPULATION IN COUNTIES IN TOTAL POPULATION OF REPUBLIC OF CROATIA, MID-2020 ESTIMATE

G-2 SHARE OF POPULATION AGED 65 AND OVER IN TOTAL POPULATION, BY COUNTIES, MID-2020 ESTIMATE 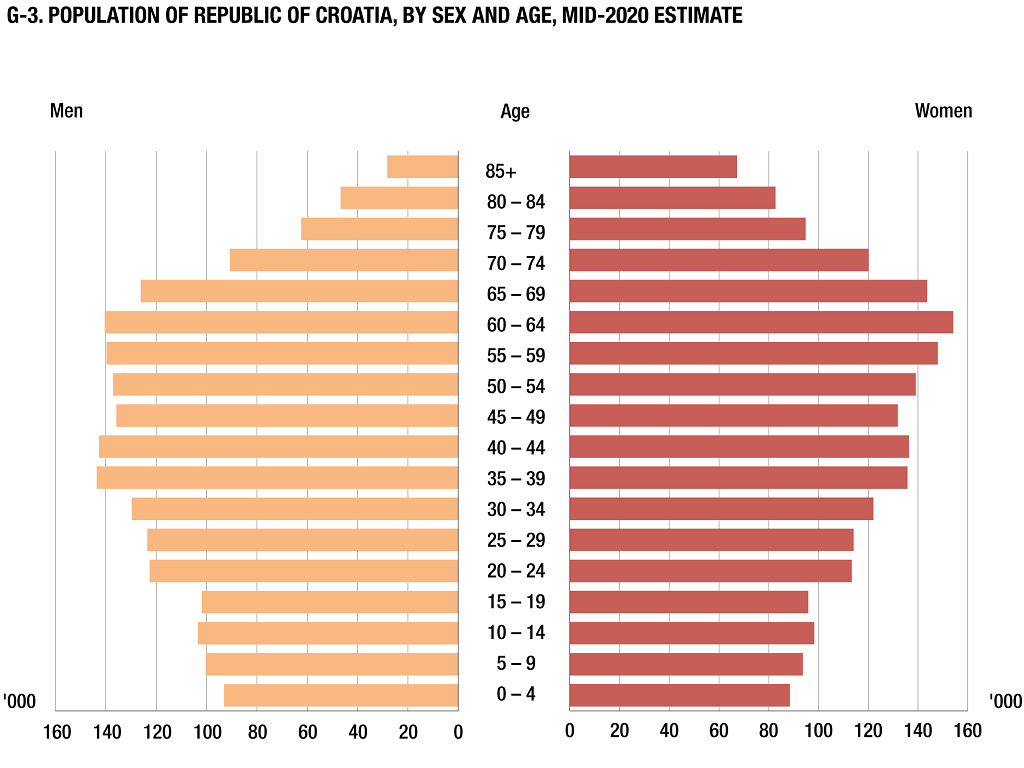 The following surveys are the data sources for the population estimate of the Republic of Croatia:

- 2011 Census of Population, Households and Dwellings

- statistics of the internal migration of population

- statistics of the international migration of population.

Population estimate is done on the basis of the census data collected in the 2011 Census of Population, Households and Dwellings.

The data on births are collected through the Statistical Report on Births (DEM-1) for every entry in the State birth register.

The data on deaths are collected through the Statistical Report on Deaths (DEM-2) for every entry in the State death register.

The surveys on the internal and international migration of population are based on data collected by the Ministry of the Interior.

Population estimate is calculated on the basis of the 2011 Census, natural change and net migration data.

- those who arrived in their place of usual residence during the 12 months before the census moment with the intention of staying there for at least one year.

A live born child (live birth) is every child who at birth exhibits signs of life, such as breathing, beating of the heart, pulsation of the umbilical cord or definite movements of voluntary muscles.

A deceased person (death) is every live born person in whom there is a permanent disappearance of all evidence of life.

Data by age are expressed by completed years of age on the referent date. The data by age groups include persons who reached the age within the limits of an interval.

Fertile female population includes women between 15 and 49 years of age.

Place of permanent residence, according to Article 2 of the Permanent Residence Act (NN, Nos 144/12 and 158/13) is "a place and address in the Republic of Croatia where a person settled with an intention of staying permanently in order to exercise their rights and commitments related to life interests such as family, professional, economic, social, cultural and other interests".

Net migration of population (migration balance) is the difference between the number of immigrants and the number of emigrants of a particular area or country in a given period of time.

The data are presented by territorial constitution according to the Act on Territories of Counties, Towns and Municipalities in the Republic of Croatia (NN, No. 86/06), with the situation as on 31 December 2020.

USERS ARE KINDLY REQUESTED TO STATE THE SOURCE.